Red Pirate is often recognized as one of the only pure Hollingsworth dogs to earn his championship title. While the Hollingsworth family is recognized today as a catalyst bloodline, their potential to improve other lines was not always known. Without this knowledge, Wildside kennels purchased the Hollingsworth yard. After seeing them, they sold the dogs off individually as their Eli dogs were significantly more talented. As time passed, many of these dogs would go on to become ROM producers in the hands of new owners.
The catalyst concept became globally recognized only after the success of the first cross to Yellow. The resulting Gr Ch Mayday, Ch dragon lady, Ch choice and others found their way into the hands of a legitimate dogman in Victor Aycart. Victor would eventually use Mayday to race David Tant (the owner of Maydays sire) and defeat a pure RBJ animal. The matchup highlighted the crosses potential superiority to pure RBJ animals. From these individuals came a mix of 3/4 RBJ dogs, 3/4 Hollingsworth dogs, and more 50/50 dogs that essentially turned the dog world inside out. The Hollingsworth dogs were also crossed with other lines (such as Chinaman and Snooty) and more champions and grand champions emerged.
And here our story begins:
People have said that the greatest mystery surrounding Hollingsworth was why didn’t he breed his foundation bitch, lady in red, to the similarly bred Gr Ch Buck.
The answer came to us on a visit to North Carolina while breeding a daughter of Red Pirate. Upon seeing our female, the owner of the stud disclosed that he not only had Peppermint Patty (the dam to Red Pirate), but also registered her.
He stated that Hollingsworth gave him Peppermint Patty while suffering with cancer under the condition that her sire was not publicly disclosed. Hollingsworth stated that the bitch was off Ruby and a famous gr ch brought to the Carolinas for a short time. Further, the owner would be angry if he knew EJ had bred to the dog. The story continued that while Hollingsworth never spoke the studs name, everyone knew Gr Ch Buck spent a peroid in the area near the time of Peppermint Patty’s birth.
Peppermint Patty’s new owner was left with a decision regarding the animal’s registration. Being that he had registration rights to Paddy (the sire to Ruby), he decided to register her as double Paddy. That is, Ruby bred back to her sire, Paddy. In this manner, he was respecting Hollingsworth’s request for privacy while keeping the breeding as close as possible to its true identity. Peppermint Patty would later be bred to Prince to create Ch Red Pirate.
So why did Hollingsworth not breed the greatest performance dog of the family (Buck) to his dogs? He did! But whatever conflict occurred between he and the stud owner limited the endless possibilities that more buck blends could be created. And we have come full circle to not only see why Lady in Red was never bred to Buck but why Pirates talent was superior to any other pure Hollingsworth dog of the day!
Thanks for reading!
TITAN KENNELS 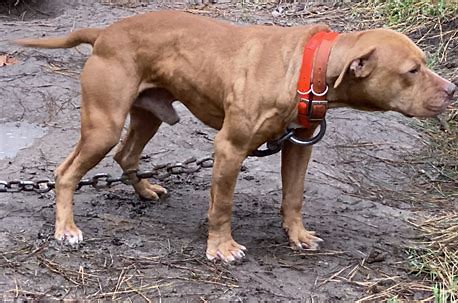