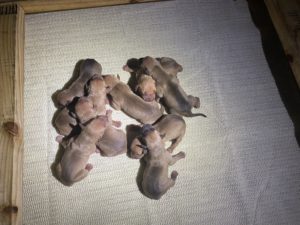 The formula for this breeding began when we put Hollingsworth Bull semen in a pure RBJ female. This 50/50 Hollingsworth/RBJ combination replicated the breeding of Gr Ch Mayday. We next took the litters best male (Red Bull) and bred him to Ch Pumas littermate sister (Bella). This led to another Ch, in Red Bull Jr. Finally, we breed Red Bull Jr to his sires littermate sister (Madonna), effectively making a 3/4 mating while quartering pure athleticism (from Ch Pumas sister). These animals will be improved versions of their sire and dam and priceless brood stock!