On January 28, 2020, five dogs and six pups were stolen from our home by animal control. Local media headlined the seizure as a “dog fighting raid“ and stated that the animals’ caretaker was wanted on felony charges. As with other attacks on animal owners across the country, none of this information was accurate. This sensationalized reporting by the media achieved the promotional rating desired by all who participated.

As owners of a professional kennel, we are often tasked with training animals for weight pulling competitions. When the head of the American Preservation Dog Registry (APDR) asked that we judge the registry’s upcoming conformation event, we began training two animals to compete in the weight pull segment. Soon after, we were confronted by a neighbor demanding that we discontinue these activities. When we failed to comply, she threatened us. Days later, this neighbor, local news, and animal control all converged on our property. No search warrant was obtained. Animal control trespassed on our private property to remove five dogs and six pups.

An attorney hired to retrieve the animals quickly discovered the neighbor’s identity. She was the president of a local animal rescue with connections at animal control and the local news (as evidenced by her pet adoption videos throughout the news channel’s search history). She would go on to manipulate the story to the media and report that we were wanted on felony charges for dogfighting. Again, none of the information being circulated was accurate. This is evidenced by the fact that they were unable to use our name in the report.

However, none of this stopped the damage these individuals were able to inflict. Based on the media report, we were evicted from our home. We lived in a hotel with our infant daughter through most of the pandemic (to this point) and we were only recently able to secure new living arrangements. The financial hurdles were monumental. We were forced to hire multiple attorneys to jam veterinary paperwork down their throat so that they could not further attack us. And it all paid off, minus a ton of money and a home.

Throughout this country, animal control units are using the “immediate veterinary care” provision as an excuse to trespass on private property (without a warrant). The extreme measure is being viewed by prosecutors as well-meaning and not held to a criminal standard. In the above case, the prosecutor’s concern was only for the well being of the animals rather than the illegal search and seizure. However, the abuse of this distinction is becoming more and more evident as we see warrantless search and seizures continue throughout this country.  Despite having over fifteen veterinary documents and no injured animals, we were incredibly lucky in this situation.

We would like to take a moment to thank the APDR for their incredible support. They have traveled around the country supporting people falsely accused of crimes and have even testified as an expert witness in some cases. The APDR has the breed’s best interest at heart and made dealing with this event significantly easier than it may have been otherwise . 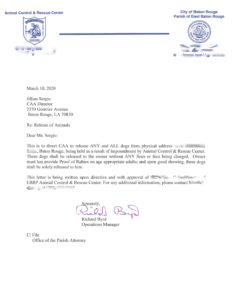